The Covid-19 pandemic has worsened an existing gender gap in the Vietnamese workplace, with women facing discrimination in terms of employment opportunities and working hours, the ILO said. – VnExpress International 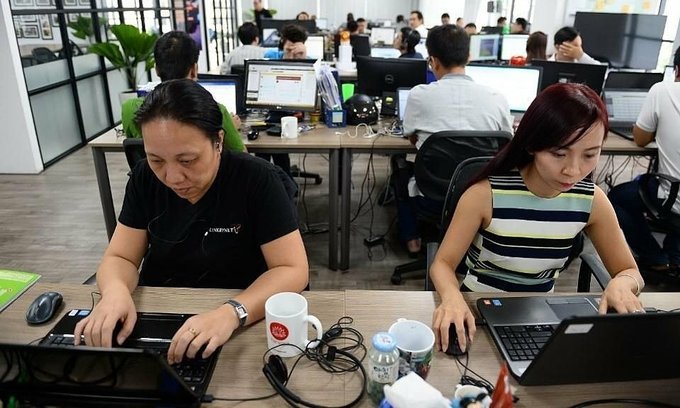 Women at work at a tech firm in Ho Chi Minh City. Photo by AFP.

“Those employed women who worked longer hours than usual possibly wanted to make up for the income losses in the second quarter,” Valentina Barcucci, ILO Vietnam labor economist, said.

“Such additional hours made the double burden heavier to carry, as the time spent by women on household chores remained disproportionately high.”

Woman face multiple and persistent inequalities and carry a disproportionate double burden of work and family responsibilities, the report stressed.

“They spend twice as many hours on household work than men.”

Women spend an average of 20.2 hours a week cleaning the house, washing clothes, cooking and shopping for the family, and family care and childcare, while men spend 10.7 hours.

Nearly 20 percent of men do not spend any time on these activities at all.

The report said more than 70 percent of Vietnam’s working age women are in the labor force compared to the global rate of 47.2 percent and Asia and Pacific rate of 43.9 percent.

The rate of women holding decision-making jobs is still low, accounting for over half the workforce but less than a fourth of management roles.

Only 29.7 percent of leadership positions are occupied by women in the state sector and 34.1 percent in the foreign-invested sector.

“Again the gap women face in job quality and career development stems from the double burden they carry,” Barcucci said.