An international trade route passing through Vietnam is being shunned by transport firms because of complicated customs procedures that increase costs. – VnExpress International 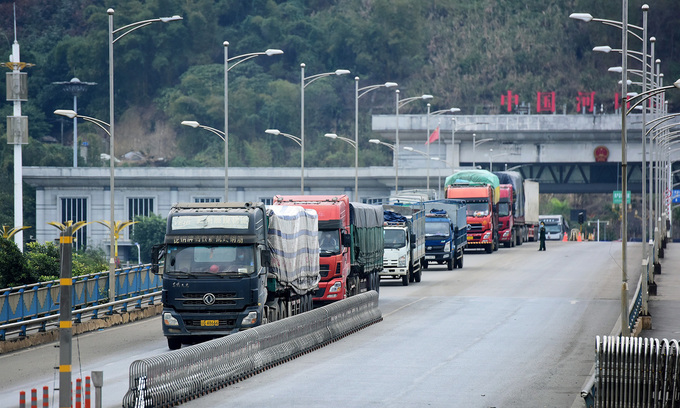 Containers pass through the Kim Thanh Border Gate No.2 with China in the northern province of Lao Cai. Photo by VnExpress/Giang Huy.

The CEO of a Hanoi-based transport company said many logistics firms are currently using a new route connecting China with ASEAN countries via Laos without going through Vietnam.

If the examination results in damaged goods, transport companies will have to compensate their customers, he said. No one will want to let their goods go through Vietnam if these inspections continue, he added.

The CEO of another transport firm with over 50 container trucks told Tuoi Tre newspaper that customs officials examine many of their containers and demand more details like proof of origin and product codes even though the goods are only in transit and not being imported.

She said transport companies often do not have these details as they only deliver the goods through Vietnam, not importing the containers.

The random checks on goods could take up to months with hundreds of containers being queued up, which could result in damaged goods, she added.

The northern province of Lang Son is home to two key border gates linking Vietnam with China. These are part of an international trade route that includes Japan, South Korea, Laos Thailand, Malaysia and Singapore.

However, transport firms say that the complicated procedures which result in high costs are urging them to use another route which connects China with Thailand, Malaysia and Singapore via Laos, bypassing Vietnam totally.

Customs officials, however, say that that the examinations and other procedures are needed to prevent smuggling.

Nguyen Van On, deputy head of the Anti-Smuggling Department, Vietnam Customs, said many smugglers label their products as goods in transit to avoid getting caught.

In an anti-smuggling campaign in July, customs officials found 75 percent of containers violating regulations, most of them carrying fake goods, he noted.

On said his agency has reported these examination results to the ASEAN Transport Association and affirmed that these procedures are legal.

Some experts have said that although the anti-smuggling campaign is necessary, customs officials should find other solutions for the examinations that do not form obstacles on the international transit route.