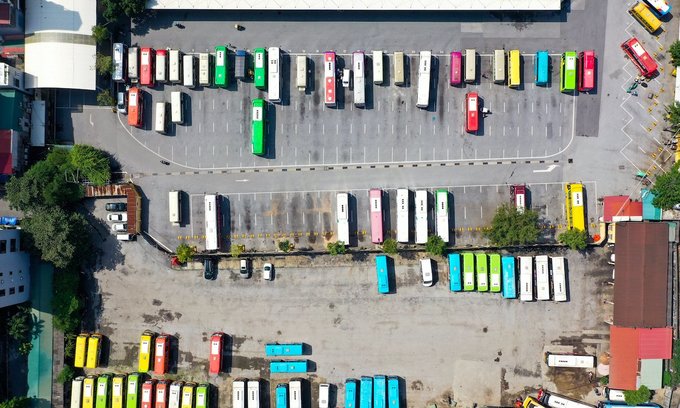 “Hanoians are afraid of leaving for other localities. Most passengers are those with medical needs from other provinces.”

Drivers also need to guarantee they will not enter areas with Covid-19 risks, and have to be responsible if an infection is found on their vehicle, Khai said, adding he would stop driving next week.

On average, each trip has three to five passengers, he added.

“Some bus stations are bearing losses to retain passengers, while most have suspended services.”

Hanoi has seen its number of new Covid-19 cases rise since last week with 100 confirmed Thursday. In the past seven days, the average number was 61.

This is why Gia Lam Bus Station in Long Bien District was also deserted Thursday.

Hai Au, which offers services from Hanoi to the northern port city of Hai Phong, is selling only 20 tickets a day.

The company used to have a bus every 30 minutes, but now only every two hours.

Chu Nam Son, a driver on the Hanoi – Yen Bai route, has been leaving the station with only two passengers in the last few days.

“In the last 10 days, breaking even was lucky,” said Son, who is considering suspending services until the Covid-19 situation improves.

Director of Gia Lam Bus Station Nguyen Duc Vui said only around 100 buses leave the station a day, much lower than before the pandemic, as some provinces like Bac Giang and Ha Giang have suspended interprovince travel.

The same situation is seen at three other bus stations in the city: My Dinh, Nuoc Ngam and Yen Nghia.

At the downtown Hanoi Railway Station, only a few passengers were seen waiting Thursday morning.

“We sell only 50 tickets a day,” said a ticket vendor.

Pham Thi Anh Dao, a station manager, said after the first week of surging demand as routes resumed, the station saw passenger numbers plunge by half.

Two of the North-South trains, and the Hanoi – Vinh route have been suspended due to low demand, she added.

The only route with high demand is Hanoi – Hai Phong, with 60–100 passengers coming from Hai Phong a day, according to Bui Van Son, head of Long Bien Station.

Air travel, however, seems to be picking up speed with 53,320 passengers passing through Noi Bai International Airport in the past seven days, up 63 percent from the previous week.

Around 40-50 percent of seats are occupied on average, while the Hanoi-Ho Chi Minh City route alone has seen rates of 80-95 percent.