The VN-Index shed 0.52 percent to 1,186.06 points Wednesday, with profit-taking pressure on blue chips the main drag on the market. – VnExpress International 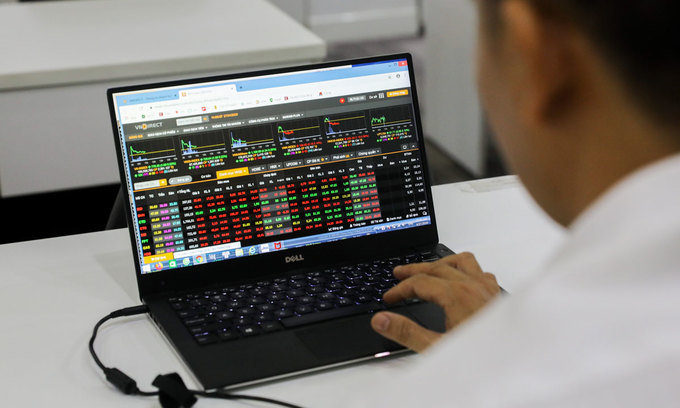 An investor looks at stock prices on a laptop at a brokerage in Ho Chi Minh City. Photo by VnExpress/Quynh Tran.

The benchmark index had surged to 1,200 points immediately in the first half-hour of trading, but began sliding immediately after as investors offloaded large-cap stocks to lock in short-term profits.

Thus the index failed to surpass cross the historical peak of 1,204 points this session as many securities companies had predicted.

The Ho Chi Minh Stock Exchange (HoSE), on which the VN-Index is based, was predominantly red with 254 stocks losing and 193 gaining. Total trading volume rose 15 percent over the previous session to VND18.19 trillion ($791.07 million).

In the same sector, KDH of Khang Dien House was down 1.5 percent, while NVL of Novaland added 0.3 percent.

In the opposite direction, ROS of construction firm FLC Faros topped gains with 7 percent, its ceiling price.

Other gainers included FPT of IT services giant FPT, up 1.1 percent, and SAB of brewer Sabeco, with 0.8 percent.

Meanwhile, the HNX-Index for the Hanoi Stock Exchange, home to mid-and small-caps, and UPCoM-Index for the Unlisted Companies Market continued their ascent, albeit slowing down and gaining only 0.23 percent and 0.05 percent, respectively.

Foreign investors continued to net sellers for the fifth straight session to the tune of nearly VND340 billion on all three bourses, with selling pressure mostly on HPG of steelmaker Hoa Phat Group, which shed 0.5 percent, and VND of brokerage VNDirect, down 2.4 percent.