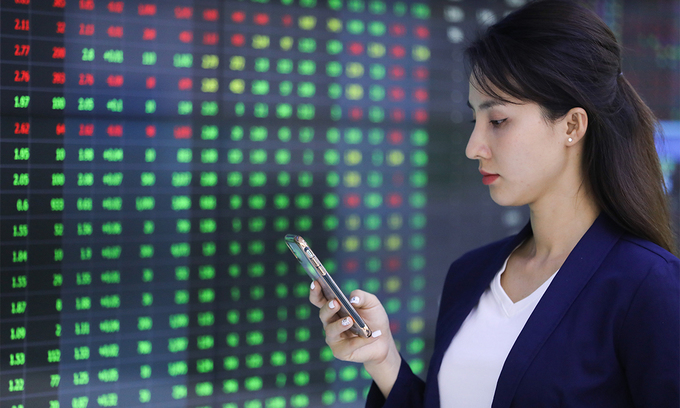 An investor looks at stock prices on a smartphone at a brokerage in Ho Chi Minh City. Photo by VnExpress/Quynh Tran

The index started to rise in the afternoon and closed eight points higher. It has ended in the green.

Trading value on the Ho Chi Minh Stock Exchange (HoSE), on which the index is based, fell 6 percent to VND26.14 trillion ($1.15 billion).

The ticker contributed most to VN-Index’s gain this session, bringing it up by 2.7 points.

PNJ of Phu Nhuan Jewelry climbed to a new peak with a 3.8 percent gain, having risen nearly 27 percent in the past two months.

On the flip side, HDB of HDBank fell 1.3 percent, while VRE of retail real estate arm Vincom Retail lost 1.1 percent.

Foreign investors were net buyers to the tune of VND226 billion with strongest demand on HPG of steelmaker Hoa Phat Group and GAS.

The HNX-Index for stocks on the Hanoi Stock Exchange, home to mid and small caps, rose 1.24 percent while the UPCoM-Index for the Unlisted Public Companies Market scored 0.76 percent.