The VN-Index rose 0.62 percent to 1,192.28 points on Tuesday, with steel, construction and real estate the best performers. – VnExpress International 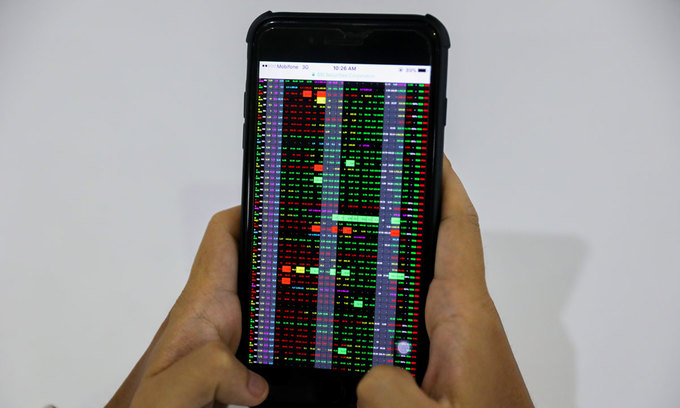 An investor looks at stock prices on a smartphone at a brokerage in Ho Chi Minh City. Photo by VnExpress/Quynh Tran.

The Ho Chi Minh Stock Exchange (HoSE), on which the VN-Index is based, was predominantly green with 269 stocks gaining and 178 losing. Total trading volume plummeted 15 percent over the previous session, to VND15.8 trillion ($684.98 million).

According to brokerage BVSC, the VN-Index is poised to breach its historical peak of 1,204 points the very next session, but investors need to be aware of profit-taking pressure that could result in strong corrective sessions in the near future.

Stocks in industries such as real estate, securities, banking, steel are likely to publish positive fourth quarter business results in the coming days, and cash will rotate towards outperforming listed companies, it added.

The VN30-Index for the stock market’s largest caps added 0.48 percent, with 16 gainers against nine losers.

ROS of construction firm FLC Faros topped gains with 6.7 percent, its ceiling price. It was followed by HPG of steelmaker Hoa Phat Group, with 4.3 percent, and REE of appliances maker Refrigeration Electrical Engineering, with 3.7 percent.

Real estate was one of the best performing sectors this session, with TCH of Hoang Huy Group gaining 3.7 percent, KDH of Khang Dien House 2.3 percent, VHM of giant Vinhomes 0.3 percent, and only NVL of Novaland shedding 0.1 percent.

Some of the biggest capped gainers this session included VHM of private conglomerate Vinhomes, up 0.3 percent, GAS of energy giant PetroVietnam Gas, 0.3 percent, and two of Vietnam’s largest state-owned banks by assets, VCB of Vietcombank and BID of BIDV, with 1 percent and 0.5 percent respectively.

Private banks remained the worst performers this session. STB of Sacombank was down 1.5 percent, VPB of VPBank 0.9 percent, TCB of Techcombank and HDB of HDBank 0.4 percent, while EIB of Eximbank kept its opening price.

In the public sector, CTG of VietinBank fell 0.5 percent, while MBB of mid-sized Military Bank was down 0.8 percent.

Meanwhile, the HNX-Index for the Hanoi Stock Exchange, home to mid-and small-caps, rose 1.3 percent, while the UPCoM-Index for the Unlisted Companies Market gained 1.22 percent.

Foreign investors were net sellers for the fourth consecutive session, to the tune of over VND250 billion on all three bourses. Selling pressure was mostly on HPG of Hoa Phat Group and VHM of Vinhomes.