The VN-Index edged up 0.21 percent to 890.14 points Tuesday, with retail blue chips being some of the best performers. – VnExpress International 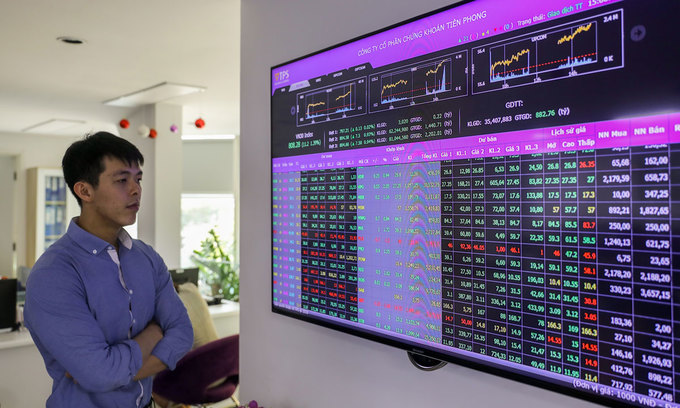 An investor looks at stock prices on a screen at a brokerage in Ho Chi Minh City. Photo by VnExpress/Quynh Tran.

The benchmark index was immediately in the green within the first 30 minutes of trading, after plummeting 1.47 percent to 888.25 points on Monday, its biggest single-session loss in the past six weeks.

The Ho Chi Minh Stock Exchange (HoSE), on which the VN-Index is based, saw 249 stocks gaining and 160 losing. Total trading volume fell from a high of VND7.6 trillion ($327.28 million) on Monday to VND5.8 trillion, but this was still above average liquidity for a trading day on the bourse.

The VN30-Index for the market’s 30 largest caps rose 0.39 percent, with 18 tickers rising and nine falling.

In retail, VRE of mall operator Vincom Retail and PNJ of jewelry chain Phu Nhuan Jewelry were also some of the best performers, having climbed 2.2 percent and 1.5 percent respectively.

All private banking stocks were in the green this session. VPB of VPBank rose 1.8 percent, TCB of Techcombank 1.4 percent, EIB of Eximbank 1.2 percent, HDB of HDBank 0.7 percent and STB of Sacombank 0.4 percent.

Of Vietnam’s three biggest lenders by assets, CTG of VietinBank was up 2.2 percent, BID of BIDV 0.6 percent, while VCB of Vietcombank was one of the biggest losing tickers, at 1.3 percent.

Other major gainers included FPT of IT giant FPT, up 2.1 percent, and SBT of agricultural firm TTC-Sugar, up 1.1 percent.

In the opposite direction, VNM of dairy firm Vinamilk topped losses with 1.4 percent. VIC of private conglomerate Vingroup, HoSE’s largest cap, shed 1.1 percent, and VHM of its real estate subsidiary was down 0.8 percent.

Some other losers included SAB of major brewer Sabeco and ROS of real estate developer FLC Faros, both down 0.5 percent.

Meanwhile, the HNX-Index for the Hanoi Stock Exchange, home to mid- and small-capped stocks, dropped 0.5 percent, and the UPCoM-Index for the Unlisted Public Companies Market added 0.31 percent.

Foreign investors turned net sellers to the tune of VND428 billion on all three bourses, with buying pressure mostly on VIC of Vingroup and VNM of Vinamilk.