With no end in sight to pandemic, fear of unemployment stalks workers

Across sectors in Vietnam, people remain in fear of losing their jobs as the Covid-19 pandemic continues to take a toll. – VnExpress International 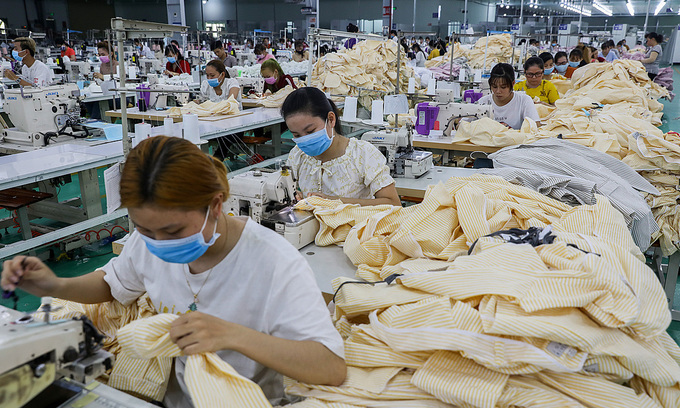 Workers at a garment factory in the southern province of Long An. Photo by VnExpress/Quynh Tran.

Thuy An, 24, a teacher at a kindergarten in Hanoi’s Ha Dong District, has been knitting since the Covid-19 pandemic broke out. She has one or two orders a week thanks to an aunt’s help.

“Though I don’t have many customers, I keep pursuing knitting since the skill might benefit me later on,” she says.

When Vietnam was hit by the first wave of Covid-19 early this year, her school was closed, her mother’s eatery had no customers and her father did not dare ply his trade as a motorbike taxi driver.

After a few weeks schools reopened, and she and her colleagues started teaching again.

However, the fear of a fresh outbreak and school closure still haunts them, and so she still knits while her family had also considered moving back to their hometown to farm if they face another layoff.

Linh, a long-time worker at a textile and garment factory in the Dong Nai Industrial Zone of the southern province of Dong Nai, finds herself in a similar situation. She is still working but worried about losing her job.

During the first outbreak, Linh’s company reduced working hours and told workers to take turns to work. But when the second wave of Covid-19 hit in July, the number of working days was slashed by more than half.

In August she only worked two weeks and spent some of the remaining days helping sell refreshments at a street stall. She can only work during weekends when the stall has lots of customers and needs assistance. Her income has decreased by more than half to VND5-6 million ($215-259) per month.

“I worry the company would lay off workers for good if there are no new orders in future.”

Recent reports show that the textile industry is struggling with very few orders. Companies normally have export orders for the entire year and often even for the first half of the next year, but some are surviving on weekly orders.

Minh Thy, who works at a restaurant in Hanoi, said she and her colleagues only work four hours a day now instead of the normal eight hours, while her salary has been cut by 60 percent to VND2-4 million a month.

Before the outbreak her restaurant received nearly 250 customers a day, but now it is down to 70-90.

Her employer did not want to cut staff, but half the workers quit themselves to find a more stable job.

“Some know foreign languages while some even have certificates in accounting and computer science,” Thy said of the colleagues who sought new jobs.

But she has no intention of switching.

Nguyen Xuan Duong, chairman of Hung Yen Garment Corporation, said no one in the industry wants to fire workers since it would take three to five years for a company to train a worker to reasonable skill levels.

They have reduced workers’ hours and shifts so that everyone would have a chance to earn an income.

Pham Xuan Hong, chairman of the Ho Chi Minh City Association of Garments, Textiles, Embroidery and Knitting, said the rate of layoffs this time around is less than during the first wave because many companies are trying to keep their employees, waiting for the disease to be controlled and hoping orders would rise again in the fourth quarter.

According to the association, the layoff rate of foreign enterprises in the sector is estimated at around 20 percent in the third quarter, compared to 5-7 percent for local firms.

Hong said the ratio could rise in the remaining months of the year following the wage cuts. Many workers would quit their jobs because their incomes are not enough to support their families.

Data from the General Statistics Office shows that 31 million people lost their jobs or saw their income drop due to the pandemic, with the latter affecting 57.3 percent.

The unemployment rate is expected to keep rising at least until the end of this year, according to the Ministry of Labor, Invalids and Social Affairs.

In the worst case scenario, the ministry estimated that 60,000-70,000 people will lose their jobs every month until the end of the year, mostly in tourism, services, construction, transport, and manufacturing.